Manyullyn is an alloy made by combining 1 Cobalt ore  and 1 Ardite ore using the smeltery from Tinkers' Construct. They are made in a similar manner to other metal blocks, by draining the liquid metal into a Casting Basin. 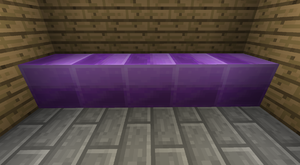 Manyullyn is rated as being harder than the nether ores, meaning that Manyullyn blocks once placed can only be removed using tools that are also made from Manyullyn.

Manyullyn blocks can also be used in the bases of beacons.