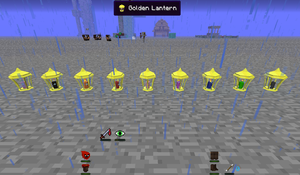 This article is a stub. You can help Hexxit Wiki by expanding it.

The Golden Lantern is a light source that is included as a part of the Bibliocraft mod. It's relatively easy to craft and adds a nice decorative element to your structures.

The Lantern emits the maximum light level of 15 just like a Glowstone Brick. The base recipe will give the player a white candle Golden Lantern. The lantern candle can then be dyed any of the 16 colors in Minecraft. The lantern also comes in 3 different styles that automatically change based on the angle of the players view when placed. There is a floor model, wall model, and ceiling model.

The Golden Lantern can be crafted in one of two ways.

Although this UI doesn't show it, the candle in the middle of the lantern will be black if you follow the recipe below. Substitute any of the vanilla Minecraft dyes to change the candle to that color. This is a shapeless crafting recipe.

Categories:
Retrieved from ‘http://www.hexxit-wiki.com/w/index.php?title=Golden_Lantern&oldid=6108’
Cookies help us deliver our services. By using our services, you agree to our use of cookies.