The Bane of Pigs is a weapon and pan item that was added by the Tinkers' Construct mod. Currently, the only way to get this item in survival is an extremely rare find in a dungeon chest. This item is a frying pan which means that you can place it on the ground by sneaking and right-clicking the ground. It can also cook food like all other frying pans. This weapon's icon resembles a Fire Charge on a stick. 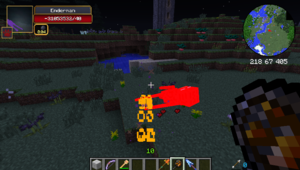 Damage dealt to an Enderman in one hit.

HP bar after hitting hydra once.

This item is the most powerful weapon in the game. Can be concluded as the "ultimate weapon". This weapon can deal an extreme amount of damage, killing all mobs in one hit as long as it doesn't have any full protection. In creative, this is a useful item as it can kill an accidentally spawned powerful mob in one hit without the need of enchanting.