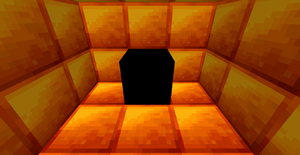 Fabric of Reality (the black block)

The block also emits a decently bright light level, enough to not let enemies spawn inside a pocket dimension, granted there are no other blocks blocking the light.

It has been known that these devilish blocks have been used to confuse players into falling into traps within the chain of Dimensional Dungeons.

This block may occasionally be found stacked within treasure chests in Dimensional Dungeons.

Category:
Retrieved from ‘http://www.hexxit-wiki.com/w/index.php?title=Fabric_of_Reality&oldid=6142’
Cookies help us deliver our services. By using our services, you agree to our use of cookies.