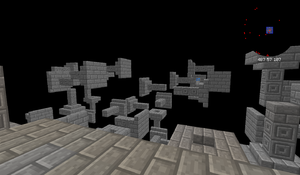 Dimensional Dungeons are part of the Dimensional Doors mod. They are dungeons that can be found in naturally occurring Pocket Dimensions.

A smart player is always wary of even the smallest signs of danger. Knowledge is power in all dimensions, and Dimensional Dungeons are no exception. Sharp wit, a keen eye and quick reflexes are all but necessary to navigate these new worlds in relative safety.

Redstone: Anything involving Redstone is automatically a sign of danger, including Pressure Plates, Levers, TNT, and Pistons. In some cases, a pressure plate is immediately after the warp door leading into the dungeon, activating a restone trap before the player even knows it. However, there are rare cases in which pressure plates or levers may be good for the player. When encountering unfamiliar redstone, it is best practice extreme caution. However, be careful when circumventing redstone as Monoliths tend to "punish" players who escape the dungeon's walls.

Tripwire: A fairly obvious one, tripwire can be a death sentence if triggered. It should be noted that tripwire can be found unsupported in Dimensional Dungeons and their tripwire hooks can be hidden quite well. Players may be watching the ground intently and trigger some tripwire above their heads, so always keep a sharp eye out.

Open air: Monoliths can appear in areas with large, open spaces, and players who aren't familiar with Monoliths may find themselves unexpectedly teleported to Limbo. 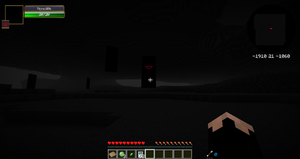 A Monolith, as viewed from Limbo

There are many dangers found in Dimensional Dungeons, including void falling traps and TNT traps, as well as Monoliths to prevent the player from avoiding environmental hazards.